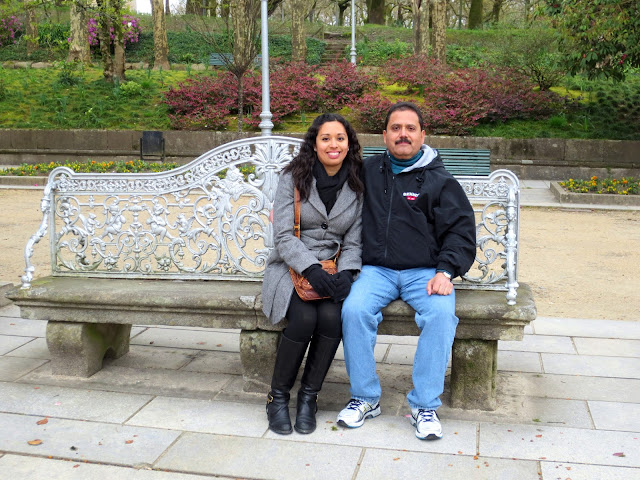 After my exhausting trip during Semana Santa, I had a quick two-day turnaround to prepare for my dad to come visit me in Ourense!

The plan was for me to meet him at the Ourense train station at the scheduled time of his arrival, and then we'd make our way to his hotel together and get him settled! Simple as pie.

I arrived to the train station at the scheduled time of arrival and couldn't find him anywhere. I waited around for 20 minutes or so in case he'd gotten himself lost in the station. Nothing. I took a bus back to Ourense center and to his hotel room. Yes! He had checked in just a bit ago, the receptionist told me. But he had just left the hotel a bit ago and she didn't know where to. I waited in the lobby for almost 2 hours before I had to go give a lesson. I went and did that, then came back an hour later, he still wasn't around. I waited another hour. Nothing. I went to my dance class and returned. The receptionist told me he was back and exhausted in his hotel room. Long story short, I was ready to kill the receptionist. My dad had specifically asked her for directions to the train station before heading out, and she didn't think to let me in on that detail. He had arrived earlier to Ourense because he didn't take a train, and then got confused about what time to meet me, I don't know. It was a head ache but I was glad we were finally together!!!! We had a light night out, getting a delicious dinner before separating to get some sleep.

Thursday I didn't want to overwhelm my dad too much since he was still clearly in a bit of a daze from the flight over. I worked in the morning and then met up with him for lunch.  We tried a place recommended to me by someone at work, and tried huevos rotos for the first time! They were delicious...it's essentially slices of fried potatoes with eggs over medium (Is that correct egg slang?), topped with your choice of meat. We chose the traditional jamon iberico to go along with it, and it was delicious.

I wanted this day to be nice and relaxing, so Juan and I mostly just walked around the city. It was during these wanderings that we discovered my dad has an affinity for posing with statues...and this became apparent throughout his visit. He just wanted to be buddies with everyone!!


Later on we were able to catch one of Anna's choir concerts, which I found to be particularly interesting and Spanish so I hope my dad enjoyed it! We got some pinchos and drinks (I believe this was the first night that my dad was introduced to licor cafe...and it was not the last!) and then headed to bed.

The next day, Friday, would be our first mini viaje to Santiago de Compostela! My dad wanted to sleep in (which was tooooooootally fine be me!!!) so we took an early afternoon train.

The train ride was nice and relaxing, but the real fun began in Santiago. We stopped at la catedral first, where my dad marveled at the greatness of it, as did I despite my having seen it before! Even the pictures don't seem to do it justice...it's just so enormous and old and pretty! We spent the rest of the day wandering around Santiago, through some gardens and small plazas, taking silly pictures whenever the heck we felt like it!! We ate a nice lunch and followed it up with dessert...twice. Why not! We had a ton of fun in Santiago and came back to Ourense exhausted.

Saturday was another mini viaje, this one to the Cañón del Sil. It was a pain in the butt trying to figure out how to get the cañón, there is no public transportation so we ended up having to take a taxi. But first, we went out to get some breakfast. I could tell Juan wanted something traditionally American...which is impossible here for the most part. So I figured we would go get some more huevos rotos and pretend we're eating breakfast when in fact we were eating a traditional Spanish lunch meal. Who cares!

After "breakfast" we met up with my house mate, Anna, and my boyfriend, Eddie, and we set off to the Cañón del Sil! I picked this day for us to go to the Cañón del Sil because it was going to be the warmest of the days that my dad was in town. It was in fact warm and the sun was shining brightly, but once we were on the boat the wind that came along with the trip was not so nice!! I know my dad loves nature so I'm glad he got to see the beautiful valley and the waterfalls and the vineyards! I had an awesome day with these three people, I was super happy they all got to meet and we all seemed to have enjoyed ourselves :)

Sunday was meant to be the relaxing day, so me and my dad went to the Termas in Outariz, the thermal baths. As my dad and I separated to go to our separate changing areas, I explained carefully to him step-by-step that he must change, rinse off, and then I would meet him at the opposite exit so we could go down to the baths together. After our little incident with his arrival to Ourense, I wanted to make sure he was clear on directions haha. So I got dressed as quickly as I could and rushed out to meet him, but he wasn't there yet. I waited five or so more minutes before I started thinking "Dang it did Juan get lost again??" I went down to the baths to search for him, walked inside and outside quickly glancing around. I was about to make my way back up to the changing rooms when I heard "Ey Cynthia! Over here!" I peer outside and see my dad, relaxed in a pool, both arms up on the ledge, 100% at ease. I couldn't help but laugh...I guess he hadn't gotten lost after all!

That night we all went out for dinner at a place Eddie had recommended, a typical parrilla which is basically a place that grills all sorts of meat, piles it onto a dish with fries and a side of sauce, sets it on your table and lets you at it. We finished the night off with some more licor cafe and buzzed conversation but settled for an early night in.

The next day my dad checked out of his hotel and together we went to Vigo! I thought it'd be nice for him to see another Spanish city, plus he had an early flight out the next morning so it would be more convenient for us to spend a night there. We had an awesome time in Vigo, walking around to the shops, getting drinks, buying souvenirs, and we ate what my father claimed was his favorite meal. It was a restaurant Anna and I had gone to before, and my dad and I ordered various raciones which included croquetas, shrimp skewers, and patatas bravas (if I recall correctly). Very typical of Galicia and topped with a typical Estrella Galicia beer. It was a nice last day :)

We woke up bright and early the next morning and made our way to the train station. I was going to take a train back to Ourense, and my dad was going to take a taxi to the airport. We had a long hug before we went our separate ways. After my dad boarded the taxi, I watched him disappear down the street, a small lump in my throat threatening to bring tears along with them. Juanny and I had such an awesome time together!!! He did drive me a little crazy trying to protect me, asking to walk me home (No, Juan, I promise you I know Ourense better than you, plus you might get lost on your way back to the hotel), telling me to be careful when I cross the street (No, Juan, here you have to just cross on your own accord or else the cars will never stop for you), telling me to be careful not to drink too much (Don't worry Juan, I went to college), etc., but I also appreciated it all. For me the trip served as a reminder of why it is he and I have come to be so very close over the years, and for that I am very thankful :)