Semana Santa gave me a week off a work, which I took advantage of by taking a Euro Extravaganza with my sissy Sofia :) The plan? Rome, Italy--> Krakow, Poland--> Paris, France. We'd been planning this trip meticulously since December or so. The most difficult part was finding a perfect balance of cities that I haven't been to yet with places that my sister wants to go, so our brainstorming list originally included about 20 different locations including Morocco, Portugal, Norway, and Croatia. From there, after infinite trials on Skyscanner to see what combination of cities yielded the cheapest flights, we somehow chiseled our list down to these 3 cities. I am completely happy with the outcome. So stop #1: Rome!! I was very excited for this city, since it seems to be one of the top-visited European places and I had yet to cross it off my list. Plus, I was ready to get my carb-on.

It seemed to take forever for me to finally arrive to the apartment in Rome... I had to take a flight to Barcelona followed by a 4 hour layover, followed by a 2 hour flight to the Rome airport where I was started to freak out because I didn't understand Italian as well as I thought I would (AND, might I add, for being such a hot tourist spot, people in Rome did not seem to speak English), and then there was a bus strike and my bus was an hour late, and what should have been an hour drive to the city center took about 2 hours, all the while I was in contact with our apartment host who told me that Sofia hadn't arrived to the apartment although she was supposed to have had arrived 5 hours prior, and then I had trouble finding a public bus to take me to the apartment, and then I found it but got on in the wrong direction, and FINALLY a Rome local was kind enough to offer help and got me on my way to the apartment...and thennnn after a 20 min walk...I arrived to the apartment. And I saw my sister!!!!!!!!!! It was just as surreal as it was when I saw her 2 years ago coming down the stairs of the hostel in Malaga, Spain. What the heck!! How did she get here!!! She doesn't belong!!! Hahahaha so it was a treat to see her, and catch up for a bit that night, as well as delve into the bags of Almond Joys and Reese's she'd come armed with. Later we headed out for a genuine Italian dinner experience. Well, that's what it seemed like anyway. Our waiter spoke about 13 words of English so we communicated mostly by gestures. Everyone else in the restaurant seemed to be very Italian, and our food was astoundingly delicious. It made for a good welcoming to Rome after such a long haul of a day to arrive! 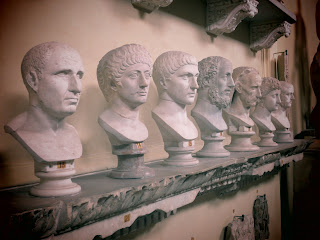 The next day our first stop was the Vatican! We took a nice stroll from the apartment to Vatican City, stopping along the way to pick up some breakfast pastries.We could tell when we were within 2 blocks of the Vatican because the line and crowds were ridiculous. We wound our way around 3 blocks of a line before finding the entrance, where we showed them our tickets and skipped the entire line (Pardon, VIP coming through). Then we proceeded to get lost into the Vatican Museum...and it was awesome. This is the kind of stuff that makes me go wild...essentially every piece in the museum is older than the United States....by a few millennia. HOW INSANE. This was just the first of manyyyy times in Rome that I had to stop and think, "Are you for reaaaaal? Are you really that old? Are you messing with me? Are we being punk'd??" Unbelievably old and unbelievably beautiful items in the Vatican Museum. 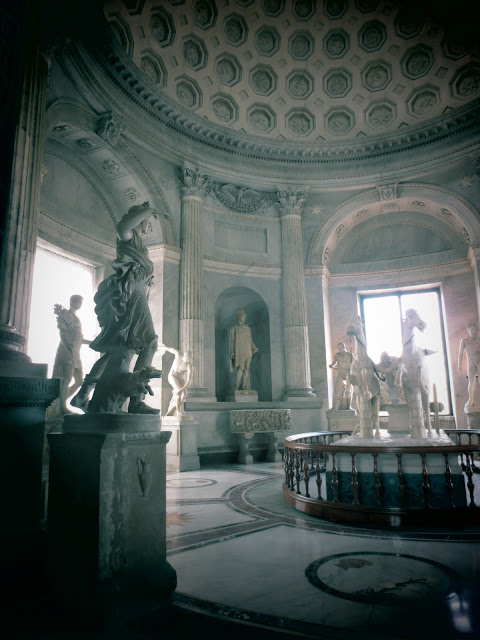 Of course after visiting the Vatican Museum you must go see the Sistine Chapel! Again, it was absolutely loaded to the brim with people. There was also a constant soundtrack in the Chapel of "NOOO FO-TOES" performed by the Italian guards. Personally, it ruined the ambiance for me lol. I give mad respect to the ballsy tourist who, when he saw the guards weren't looking, took his gargantuan carmera and went to town, CLICK-CLICK-CLICK-CLICK-CLICK, capturing a full 180 degrees of the chapel. He totally got caught 2 seconds later. But still. Valiant.

After this visit, we distanced ourselves from the touristy Vatican area and sat down for a delicious meal of eggplant bruschetta, pizza, and....no dessert! We were saving room for gelato :) I recall sitting there in the Roman sun, sipping a cold mug of Forst beer and just feeling so at ease!!! The exact sensation you seek when you go on vacation. I was falling in love with Rome :)

Next we took a walk to St Peter's Basilica, which was tourist frenzy round 2. That site in particular really makes you feel like you are somewhere hugely important. So many thick-as-tree-trunk columns, sculptures every 20 meters, and then the mountain of a basilica looming before you!

Our last scheduled activity of the day was a free tour of the city. This started off at the Piazza di Spagna (Spanish Steps) and was led by a well-dressed guide whose Italian accent caused me to struggle to follow his European humor and wit. But we got to see a lot of cool places along the tour! Afterwards we picked up some gelato and dinner then made our way back to the apartment, absolutely spent!

Day 2 in Rome was no less activity-filled than Day 1. After getting incorrect directions from Google to get to a morning market, we walked blocks upon blocks, asking different people and police officers how to get there. (Most with poor English, but, thankfully, willing to help!). After about 2 hours we arrived at Porta Portese market! And it was huuuuuuge. Stall after stall of jewelry, clothing, and....well, I only paid attention to the jewelry and clothing but there was much more! I think we ended up walking through it for nearly 2 hours before raising the white flag and finding the nearest exit in order to get some food. We had a nice relaxed pasta lunch before making our way to the Colosseum. You could see this thing from a mile away. And it only got exponentially more impressive the closer we got. And, along the way there we passed various other ruins, having absolutely no idea what they were. It felt like we were walking through a movie set. We got into the Colosseum, quickly entered and ran around taking pictures and taking in the views, and then made our way to the Roman Forum before it closed. This place was even more "ruiny" than any other place we'd visited!
We tried to soak in every minute of the Forum, but then with about 15 minutes left to closing, they started yelling out in a loudspeaker "Please proceed to the exit", over and over and over and over again...it was very Hunger Games. Sofia and I tried to sneakily make our way to the farthest exit so as to pass by the whole forum and see what else we'd missed, but a stern old man peaked out from behind a rock and pointed us to the nearest exit. Shoot. 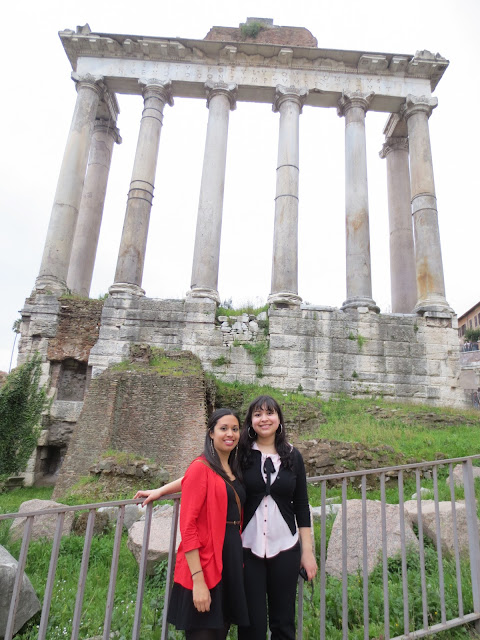 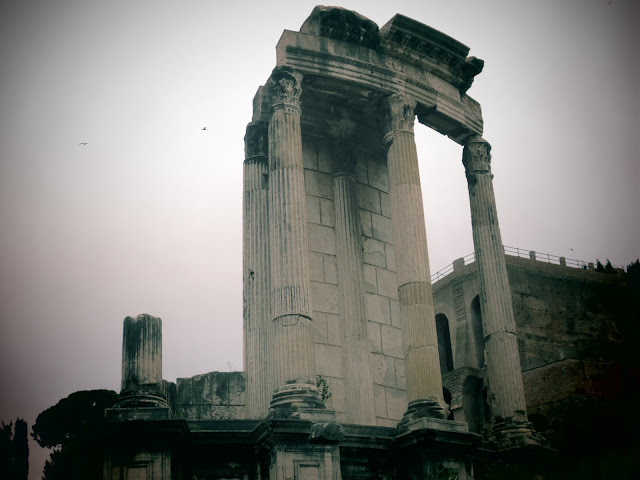 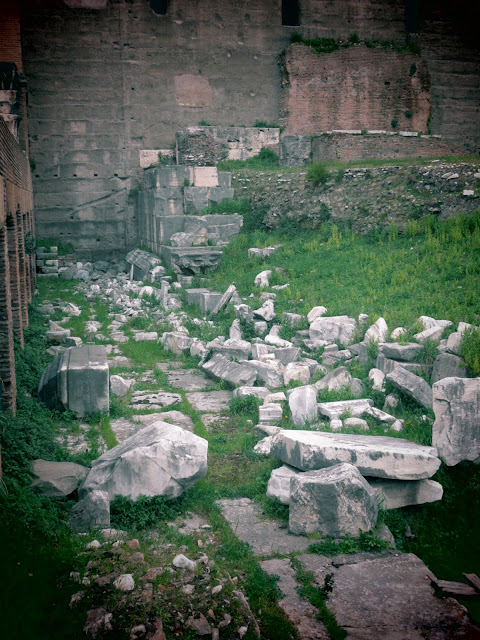 We wandered back to Trevi Fountain for the second time, because I wanted to see it during the daylight. We were having a relaxing rest when suddenly the rude cleaning officials told everyone to clear out from the fountain's seating area because it was a scheduled cleaning time. It was probably 6 or 7 pm and the area was absolutely loaded with people...what kind of inconvient cleaning schedule is that? Well, we didn't wait around to see the spectacle that was to take place. Instead we made our way to the Spanish steps and climbed all the way up for good health after so many carbs. The top of the steps reminded me of the top of the Sacre Couer in Paris. Except of course in my head the French version far surpasses the Italian one :) There were a bunch of sketch artists up there, so we wandered from canvas to canvas observing them do their work. I also observed the previous work of one particular artist, who often drew Brad Pitt. As a BP expert I was confidently able to shake my head in disgust at the inaccuracy of the man's depiction of Brad. But other artists were very good! It was tempting to get a sister picture but they were expensive and we were hungry and it was getting cold. We made our way back to the apartment, stopping to grab some calzones and pizza for dinner and croissants for the morning. In any other city I may have been embarrassed to share the fact that we got "to go" food for dinner...but in Rome thats some of the best way to get a delicious Italian pastry filled goodness.

We went to bed early and woke up before the sun the next day in order to catch our next flight...to Katowice, Poland!
Posted by Cynthia at 5:31 PM No comments: