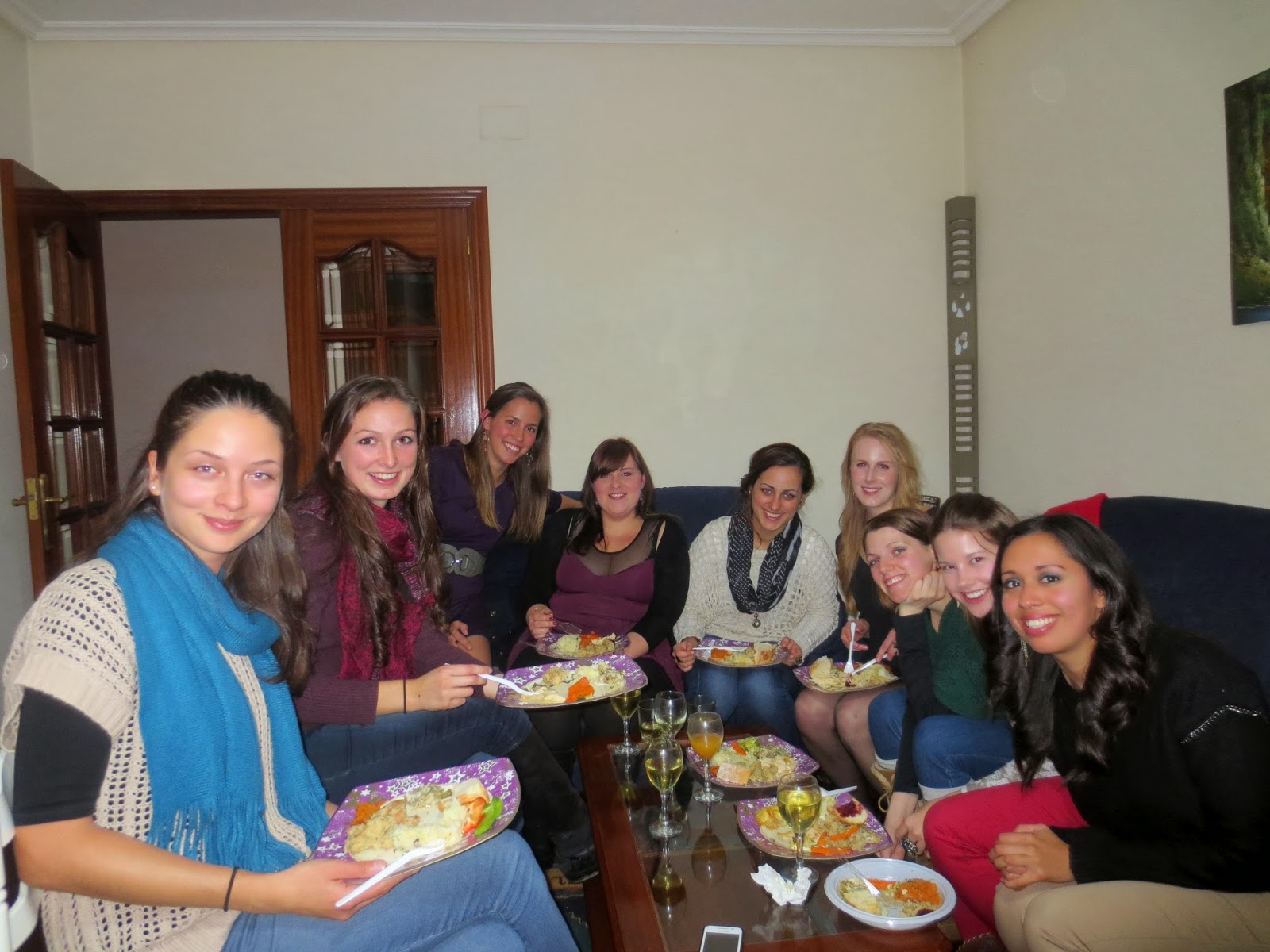 The epitome of American holidays: Thanksgiving. It also happens to be my favorite holiday. Christmas is great, Easter is cute, but Thanksgiving is the embodiment of my binging dreams realized. Unfortunately, Thanksgiving isn't celebrated in Europe! Makes sense though, with the whole holiday revolving around the Americas being "discovered", why the heck would Europe be excited about that?

So anyway, due to the lack of local Thanksgiving celebrations, I repeated what I did last year and celebrated with a group of Americans, dabbled with a Brit and some Spaniards! I can't compare this year's celebration to last year's because 1) I have poor memory 2) they were distinct groups of Americans 3) the food was different but all delicious. What can one truly complain about at Thanksgiving? "UGH I only had five helpings of pumpkin pie this year instead of the six last year. This SUCKS" heh heh heh. I forget what I made last year...but this year I made a cheesecake with a nutella ganache sauce and I am proud to say that I think I have topped Grinnell D-hall's version (now if only I could do the same with the baked ziti...). As with every year, this Thanksgiving ended with me feeling bloated and slightly ill and thus deciding to go to sleep...but it wouldn't be Thanksgiving if my day didn't end as such!!

Although it takes away a lot from the glory of my birthday on the 29th, I still find the place in my heart to forgive Christmas and enjoy it a little (lololol). We decorated our house the weekend after Thanksgiving and I am very proud of how things turned out! We made our own little tinsel hanging things and decorated our tree in classy white lights and gold ornaments. I have to give props to my friend and room mate from last year, Anna, for injecting me with the Christmas spirit that I haven't felt since I was a child. This spirit is very much alive with me this year as well! So we decorated our house while listening to classic Christmas songs, and we even bought a little pine scented oil to burn as we decorated :)

The Christmas season was getting into full swing and I was absolutely having every second of it. I started practicing "Rudolph the Red-Nosed Reindeer" with my younger students the week after Thanksgiving. I was so excited when I first saw "Merry Christmas" written in the Zara display in late November. Seeing the mall fully decorated with Christmas ornaments and lights warmed my heart. And I had one of the most enjoyable nights of Christmas celebrations when I went to my school's professor Christmas dinner--I know the professors so much more than I did last year and it really makes a difference!


It was all a happy epoca leading up to a cute little Christmas with my favorite man, Eddie! Typically, Christmas eve, or nochebuena is big here, and people eat dinner consisting of lots of seafood: prawns, scallops, shrimp, mussels, crab, etc. So that is what I ate at the professor's Christmas dinner, but for our little family dinner we decided to just make whatever our (my) heart desired and not adhere to any of the traditional Spanish dinner rules. So, what did we make? As an appetizer we mounted piles of cheese and jamon serrano on a plate (I suppose that is actually quite Spanish...but next we ventured away from the typical!), which we followed up with buttery mashed potatoes, baked mac and cheese, and honey roasted chicken! No, there were no vegetables to be found in our meal but we didn't want to be too healthy. Dessert was (and always is) my favorite part: Pumpkin Cheesecake and Pecan Pie. It was my first time making each of these and I was 100% satisfied with the results!! So we ate all of this, rolled around and complained about how full we were, drank some wine, opened our gifts, got dressed and went out to one of the village bars to finish off the night! Bo Nadal! 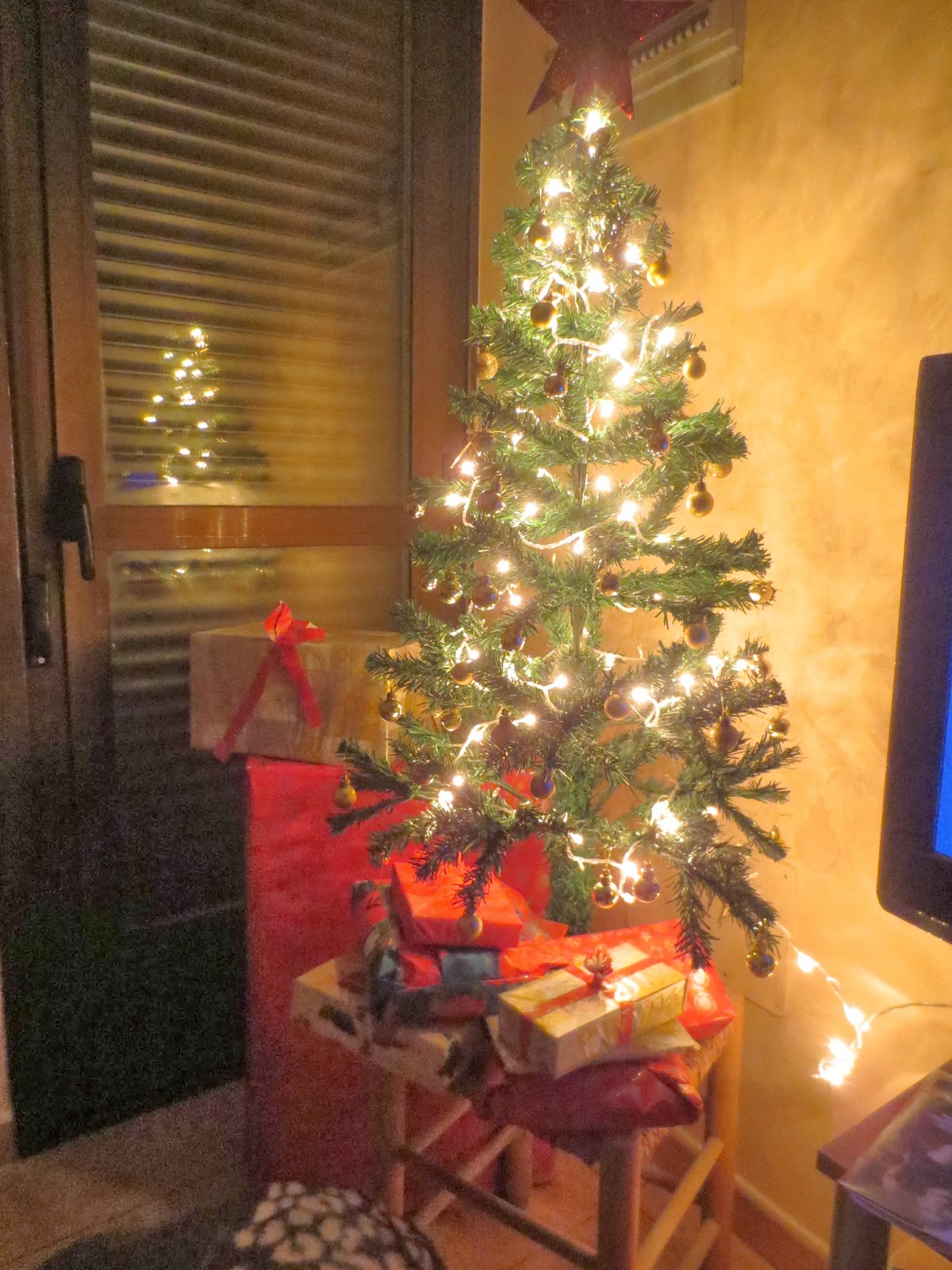 Last year, for New Year's Eve I found myself atop Montjuic in Barcelona, screaming "BONNE ANNEE" at the top of my lungs with some of my favorite French and American people around me. It was...the bomb. This year was a much tamer affair; we stayed at home, made a nice little dinner, and rang in the New Year from the comfort of our couch. We had gone out for a long night a couple days before for my birthday, so we weren't dying to have another wild night so soon after!

Spain's version of New Year's is pretty distinct from a traditional American New Year's. First of all, because of the meal schedule (I assume), it's typical for people to eat dinner as a family (which is traditionally between 9-10pm), enjoy the midnight countdown together, and then the jovenes go out to party with their friends afterwards. It's nice to see this holiday so family-oriented! I'm used to saying good night and Happy New Year to my family around 6pm at which point I go out and celebrate wildly with friends.

Also, Spain has a cool tradition of eating twelve grapes to ring in the new year. Essentially, 16-20 seconds before midnight there's a bunch of chiming on TV to warn you to get your grapes ready, and then for the last twelve seconds of the year you are to attempt to eat twelve grapes for good luck. Everyyyyyyone in Spain does it! Sounds easy, but I dare you all to try it! At midnight I had eight grapes in my mouth and only two making their way down my esophagus. At a supermarket I had seen a tiny can of twelve handpicked seedless grapes but those appeared to be a bit suspect, so we opted to challenge ourselves with seeds! And failed. But it's all about the experience :)

January 6 is known as el dia de los reyes magos, or "Magic King's Day" (aka the three wisemen). This is truly the big winter time holiday for Spaniards, from what I can tell. Christmas and Santa Claus/Father Christmas are slowly becoming more and more prominent, but most people as young as 30 years-old will tell you that when they were children, winter was all about los reyes magos and Santa Claus was just an urban legend from a faraway country! Essentially, the children behave exactly as they would with Santa Claus...but with one of the three kings: Baltasar/Balthasar, Gaspar/Caspar, and Melchor/Melchior. Kids have their favorite rey to whom they write a letter requesting gifts. On January 5th there is a big procession welcoming the reyes, and this is called the cabalgata. Apparently they throw out candy to all the children and, I don't know, they wave? Anyway, because January 6th is a holiday, everyone has vacation up until at least January 8th! I took advantage of this very long break by going to visit France...