The University of Salamanca Makes the US Look like an Infant

On my never-ending quest to conquer more of Spain, I up and booked a ride to Salamanca, Spain over the weekend! Salamanca is a city close to Galicia, about three hours away via car. It has a historic University, founded in 1134. Let's take a minute and look at that number. 1134. It's like...that should be someone's address...1134 Main Street. But it's the year the University was founded and that's pretty dang old and that's pretty dang cool! It's also the site where Christopher Columbus came to state his case for traveling west to find India. The University is truly the heart of the city, as a ton of people (30,000) study there, and everywhere you go you see students and ancient campus buildings. Also, the city has a vibrant nightlife since there are so many young people around!

Since this was a last minute trip for me, I went ahead and explored it all by myself! I hadn't done this since my trip to Dublin two years ago and man was I out of solo-traveling shape! My kind BlaBlaCar driver dropped me off directly in front of my hostel, where I proceeded to just lay for awhile. Why did I do this? Because I wanted to and there was no one else to make me move if I didn't want to!!! :) Eventually I did get my lazy booty up to wander around the city a bit. The most impressive thing of the night: Plaza Mayor. I knew that it was a focal point of the city, but being there truly reminded me of Venice, Italy with the whole center lit up in a romantic glow! I sat there and gazed at the site for awhile. I also took the time to explore the city a bit, to get lost four times, locate the tourist office, and scope out some bars for the big soccer game the next day...

The next morning I hit up the tourist office to get a map, then jumped right in to my site-seeing itinerary! First stop: Convento de San Esteban. Well, I wish I could say this was my intended point of departure for the site-seeing, but in truth I got lost while looking for the entrance to the Cathedral (the biggest building in the city...I am rusty at this solo-traveling thing) and I happened upon the convent and so I went in! It was a very peaceful and beautiful place :)

Next stop was the old + new Cathedral! The old cathedral is a smaller chapel-like place, with the claustro attached. Very cute...and what's more, there was a wedding going on!! As soon as I saw the couple up at the front I started weeping tears of joy...just kidding. But I totally did take an extreeeemelyyyy long time taking my photos in there, in an effort to wedding crash a bit. I also passed through the new cathedral which is directly connected to the old one, which also had its beautiful details. You also can't beat the wonderful aroma of incense in a cathedral :) 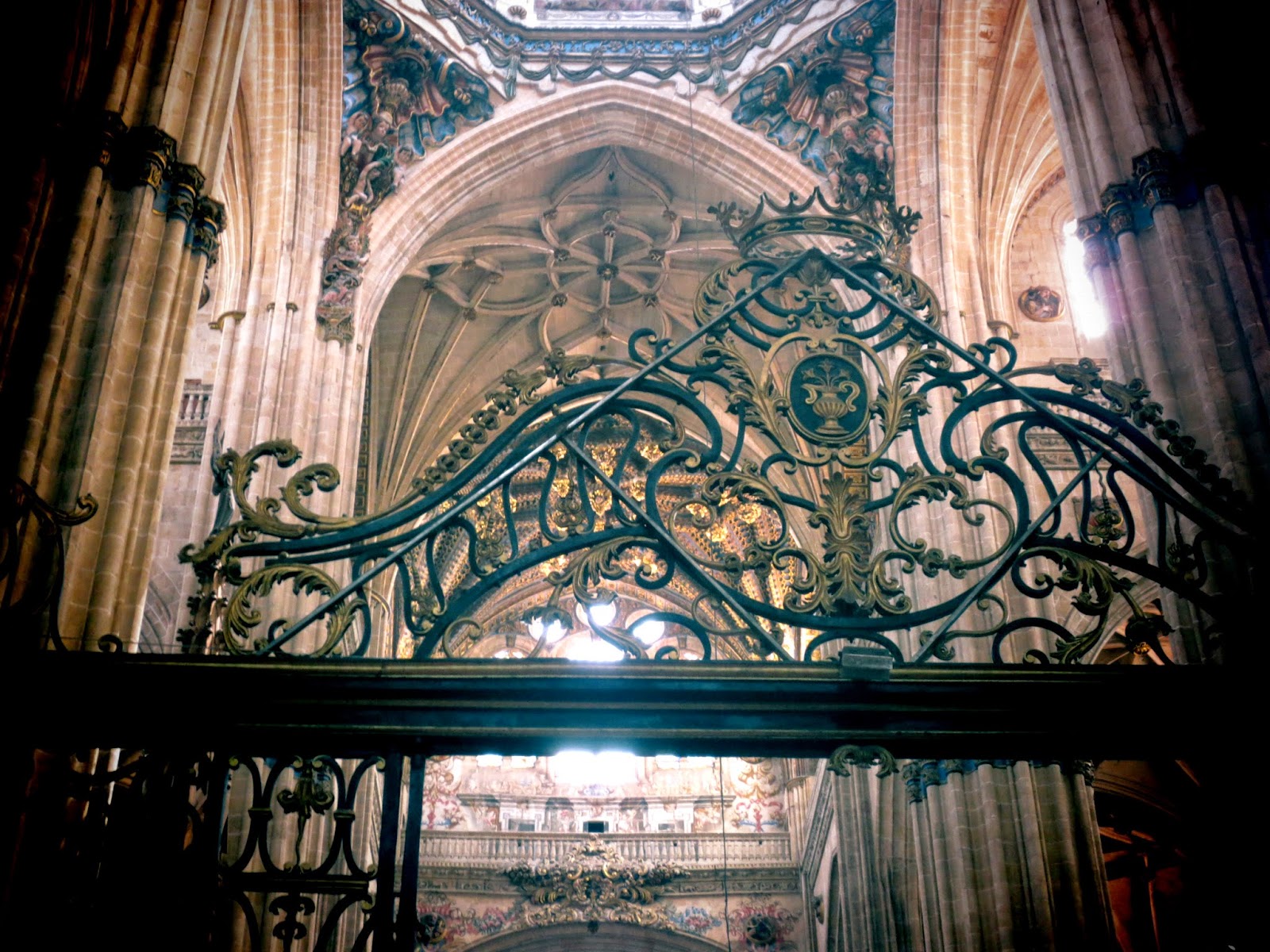 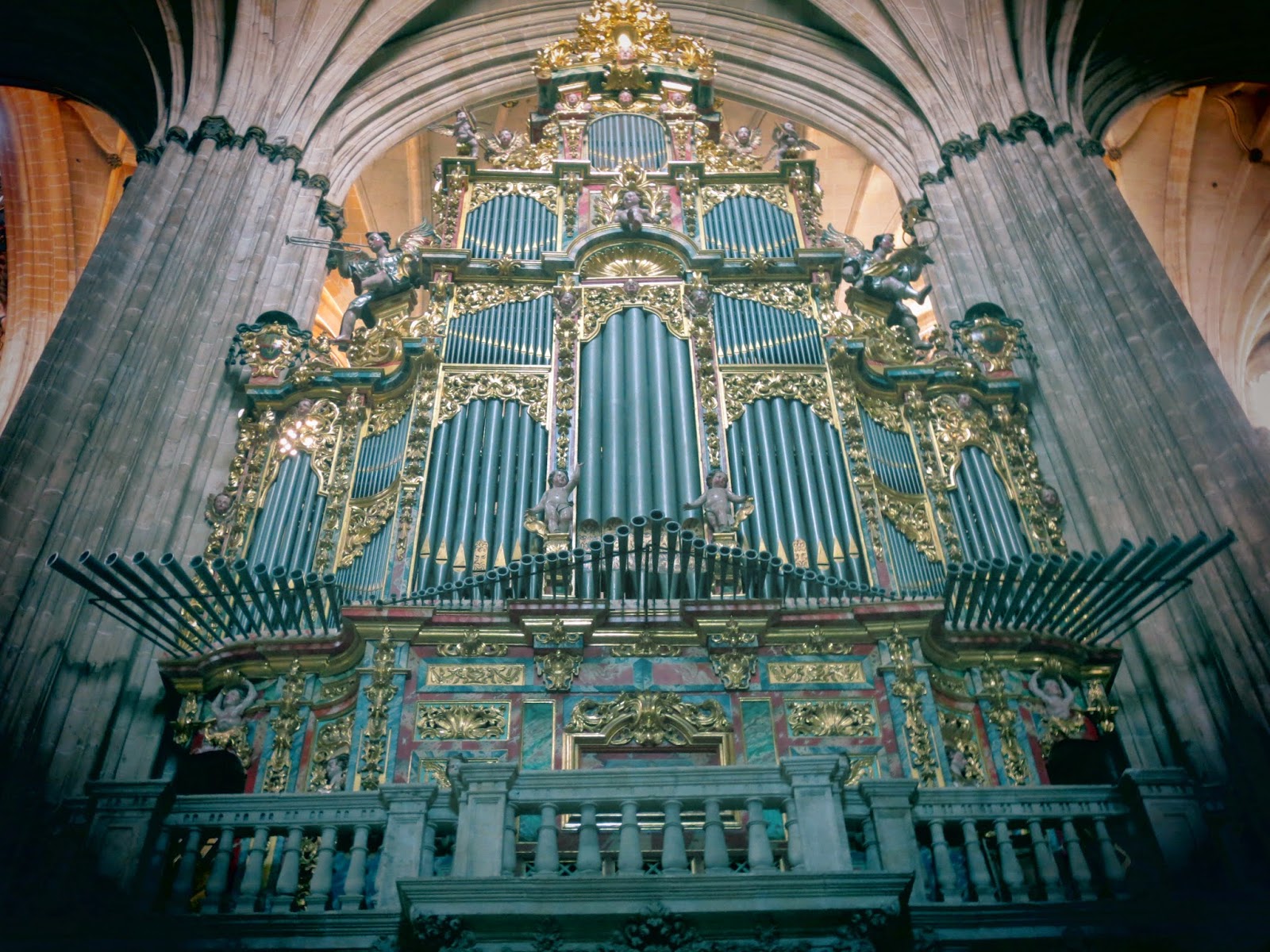 Next I stopped by a large garden with great views of the city, walked down to see the Salamanca Roman Bridge (I may be biased, but Ourense's better!) and then I continued on to a visit to Ieronimus, the tower of the cathedrals. Here I found myself, once again, climbing up a million stairs to the highest point in the city! This climb was a bit more tourist friendly, as you could stop at every floor and read a bit about the history of the Cathedral while you caught your breath. I didn't bother to count the stairs but there were a ton and I felt myself getting very short of breath and thinking I might simultaneously have a heart attack and a panic attack from the claustrophobia-inducing, steep and numerous stairs. The view from the top was great though, and I got to hear the bells chime a lot while I was up there! Totally worth it.

The last part of my day was supposed to be dedicated to a shopping mall...I Googled centro commercial quickly at the hostel before setting out. Once I got to the location I saw a large Corte Ingles...but no centro commercial of my liking!!! I asked some people about the other shopping center and they said it was outside of the city and I would need to get a car or bus. Noooooooooooooooooooooooooooo! So I took the time to wander around a bit more, found some tempting restaurants for the next day, and I had time to rest a bit at the hostel.

Then. It was time for a very important partido de futbol: Real Madrid vs. Atletico de Madrid.... Champions League Final. I don't want to get started on the details as to why FC Barcelona was not in this match, but just know that I was highly displeased and upset about the results this season. Anyway, I was rooting for Atletico even though they stole the Liga title from Barcelona, just because of the mere fact that I loathe Real Madrid with the passion of a million burning fires. Everyone on that team (besides maybe Casillas) could easily play the lead role of the villain in any movie. Everyone oozes evil, arrogance, and greed. UGH. Anyway. Long story short, Real Madrid won...I stomped out of the bar, went straight to my hostel, tried going to sleep but heard too much commotion on the streets of people out celebrating. BAD NIGHT.

The next day was my last, and originally I had planned to find a bus to make it out to that shopping center I was dying to visit. Before checking out of my hostel and heading there, I checked online to see the hours of the mall... of course, the stores were all closed, it was a Sunday! Ugh this is something I will not miss about Spain!! Thankfully I caught that minor detail of opening times before I got all the way to the mall! I went ahead to the next step in my itinerary: an Art Museum!

Casa Lis, the art deco and art nouveau museum, was great! I was almost entirely surrounded by elderly people but the stuff in there was cool. Pictures weren't allowed, but I was able to snap a photo of the beautiful stained glass that decorates the whole building. There was a big variety of exhibits, mostly focused on ceramic figurines, glass sculptures and paintings. There was also an interesting (for lack of a better term) exhibit on vintage dolls... so you entered these two huge rooms and you were immediately getting stared down by hundreds of beady little eyes!! There were also some original cupie dolls...something I think my sisters would have gotten a kick out of :)

My last site-seeing stop was the historic University! I was hoping to arrive in time for a tour...but I got lost and arrived 15 minutes after the last tour started :( But I still got to see the famous front of the University, where you're supposed to search for the hidden frog in the midst of all the other sculptured details in the door. Everyone was crowding around the area next to the frog so it wasn't quite difficult to find. Legend has it that those who attend the University and find the frog (without the assistance of anyone else) will graduate or something like that. An old guy stopped me and said "Hey...do you want to know the REAL story behind the frog?" I shrugged and said yes. He proceeded to go into a twenty minute discourse about the king and the king's son and how the frog represented sexual immorality and the son died because of it. After I politely said thank you, he then proceeded to tell me the story about various other famous parts of the city... I had to escape so I looked at my non-existent watch, thanked him for his time, and speed walked the heck away!!!

I had a couple hours to spare so I stopped by a Mexican restaurant to get my fill (Bien Trucha is still a million times better), and laid in a park for a bit to take in the sun. Eventually it was time for me to meet up with my next driver, and I probably didn't last more than 30 minutes in the car before dozing off! I was exhausted from my three days of walking around non-stop, and I was excited to get back to my Ourense and back to my own bed :)